Home » Recipes » Sides » Vegetables » We Have the Technology….We Can Build It Better Eggplant Parmesan Reconstructed

Before I start this post, I have to tell you I went through a very traumatic experience, and I’m lucky to have come through it without any serious neurological damage (or at least I hope). After dinner last night my wife so nicely pointed out that we had enjoyed two nights of completely vegetarian meals…….I gasped……all of a sudden I couldn’t breath, was this carnivore actually becoming a plant eater …………NOOOOOOOOO!!!!!
The next thing I remember was waking up holding a pack of All Beef Hot Dogs, clicking my heels together repeating there’s no place like home, there’s no place like home, there’s no place like home………sigh
Well it could’ve happened …….but as it was I was feeling full, very satisfied, and oh so pleased with myself for creating such a wonderful dinner,but just in case I hid a pack of all beef dogs in the freezer. 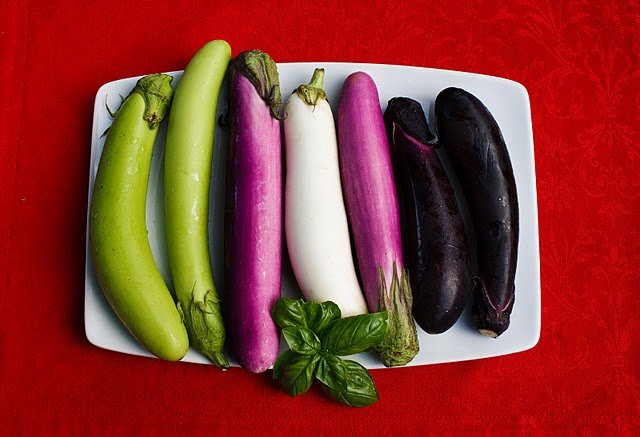 I do love Eggplant Parm, it used to be Veal Parm in the old days before I realized how evil veal was, and refused to ever serve it again, let alone eat it…..baby cows, how sad is that! Now I do still enjoy Chicken Parm, and it is one of my wife’s favorites, so when I do make it I usually bread and fry enough cutlets for a few months. But while I was walking through the farmer’s market on Saturday, looking for more wonderful fruit and veggies to carry home, I saw an inspiring display of eggplants. So many colours and shapes, this must be Eggplant Heaven! After a few moments of just staring at these beauties,  I decided on staying with the same type, but going for color. Now I knew they would pretty much all look the same after cooking, but I would  know I was eating a Technicolor masterpiece! When I bought them I was too excited to really know what I was going to do with them, I just knew I had to have them……I know a typical man, so sensory motivated, buying things just because he can……sigh……what can I say, guilty as charged. 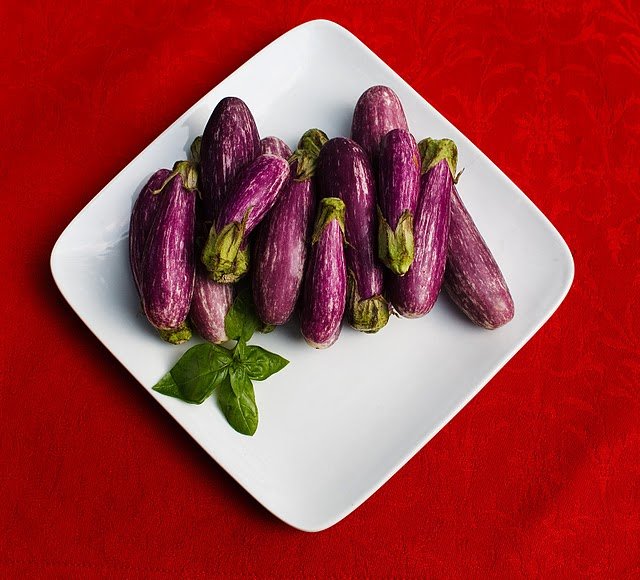 But then in a moment of Clarity it came to me. Eggplant Parm, but not they way your mother made it!
So many thoughts raced though my head, but coming off of my badly made pie crust from my last post,(which I couldn’t let go of) I thought why not put it into a crust……I’ll make an Eggplant Crostata!! Wow, now I was excited!!
I knew I didn’t want it breaded, I was going to have crust around it, and I thought long and hard about making a light marinara for it, but I wanted the Eggplant to be the star of this creation, so I decided against that. But it was a parm for goodness sake so it needed cheese…….I had just bought some French Feta that was delightfully mild and oh so tasty. I wanted a cheese that would not overpower the eggplant, or  that would end up a cheesy mess. I also had purchased some beautiful Jersey Tomatoes at the market and thought  a slice of tomato would do instead of a sauce….again the Eggplant would be the star. I made my pastry dough from a different recipe this time, I was going free form with this and it needed to hold up, but I wanted it to be tasty too. Since Flakiness wasn’t going to be an issue, I went with an all butter recipe.

I would also like to thank Jill from The Homegrown Gourmet, for her suggestion to add a little white vinegar to the water to help make a flakier crust, I will be doing that with my next pie crust! So with out further ado, I give you my re-constructed Eggplant Parm.
My Eggplant Crostata! 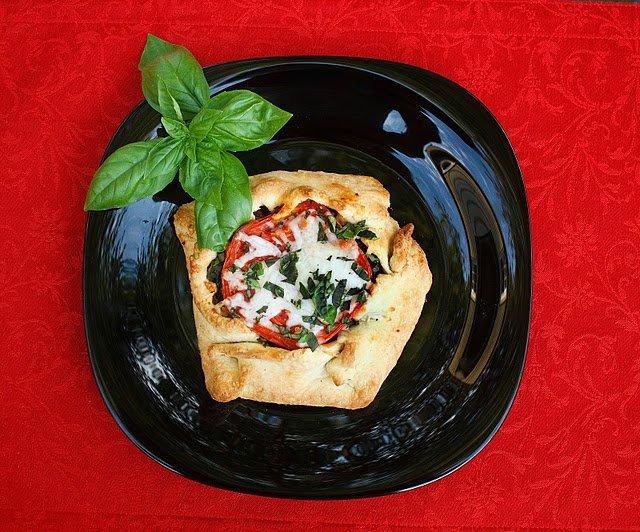 I made my dough in a food processor, but feel free to do it the old fashioned way.
Add your flour, sugar and salt in the food processor and pulse 2 times to mix.
Scatter the butter over the flour mix and pulse 7 or 8 times to cut in the butter.
Add Egg yolks one at a time and pulse 2 -3 times to incorporate.
Fluff mixture with fork and then add your ice water and pulse 5 or 6 times or until the dough begins to form clumps, do not let the dough form a ball on the blade!
It should look like coarse crumbs, dump mix into a large bowl, form into ball, then flatten into a disc, wrap with cling wrap and refrigerate for at least 1/ 2 hour. While your dough is setting prepare the eggplant.

Depending upon what type of eggplant you use either slice it or cube it, slices should be about 1/4 of an inch thick , cubes no more half inch. Add Eggplant and sliced Garlic into a large bowl and lightly coat with extra virgin Olive Oil. You need the oil to properly cook the eggplant but you do not want it to be greasy! Place your eggplant into a baking dish, season with sea salt, black pepper and the fresh oregano, place in a 350 degree oven for about 20 minutes, until eggplant is tender. Set aside to cool.
After eggplant has cooled some, add in your feta cheese. Now we need to prepare are dough for the Crostata.
All Butter doughs tend to stiffen up a bit more so you may have to let it sit out for a few minutes before you can begin to work the dough. Divide your dough into 2  even balls (you can make 3 if you would like them a little smaller) and roll it out to about 8 inches. Place a piece of parchment paper on a cookie sheet and place your rolled out dough on the paper, greasing your cookie sheet should work if you don’t have parchment.
Place 1/2 of your roasted eggplant in the center of each dough circle, top with some fresh chopped basil, and one large tomato slice. Now begin folding your dough over, I use 5 folds so it doesn’t look like a square, you may do this part however you like. You just want to do your folds so they are almost to the tomato, crimping them together some so your crostata does not come apart.
Now drizzle your tomato with a little extra virgin olive oil and a sprinkle of sea salt.
Bake for about 20 minutes at 350 degrees, or until your dough has a nice color to it. When your Crostata’s are about 5 minutes from being done, top each tomato slice with some shredded mozzarella cheese.
When the cheese is nicely melted remove from the oven, and sprinkle a little chopped basil on top of the cheese. Serve immediately !
Now I do have to say, even I was surprised at how good they came out, my dough was delicious, although a little thick near the folds, the cheese blended in very well, and that roasted tomato just sang to me!
This Crostata would be great with zucchini or other roasted veggies, even that glorious Provincial Ratatouille that I made a while back. Other cheese would work to, you just want them to compliment the vegetables you use without becoming a melted mess…..I would love these with Roquefort or Gorgnzola!!
I did double this recipe, although I did not freeze any, I think they would freeze rather nicely, we ate them again the next day. I wrapped the Crostata lightly in foil and placed them in a 350 degree oven for about 10 minutes turned off the oven and let them remain in it, while I put together a nice salad to accompany the crostata. They were excellent reheated!

I do hope you try this and if you do please let me know how they come out, and of course this dough is perfect for a fruit filling too…..maybe some of those wonderful peaches we have……yummmmmm.
All The Best!!

Previous Post: « Life is Short so Eat Dessert First, a Perfect Summertime Pie- Peach Blueberry Custard
Next Post: Salads, Muffins, and My First Give Away Too!! »