My Crab Stuffed Flounder Recipe is the ultimate restaurant-quality dish that you can make in your own kitchen.

Sweet crab meat blended with an easy-to-make imperial sauce stuffed between fillets of ocean-fresh flounder couldn’t be easier to make. Whether it’s for your next dinner party or date night be prepared to impress your guests with this delicious seafood dish.

One of the most popular dishes on my restaurant menu at the Jersey shore was flounder stuffed with crab imperial.

If you were a seafood lover my stuffed flounder was at the top of the list of choices. One of my other favorites is my baked seafood casserole.

The secret is in the imperial sauce, which takes 3-5 minutes to make. And that same sauce mixed with crab meat can be used to make Crab Cakes, Crab Imperial, Stuffed Lobster, and so much more!

What do I need to make Stuffed Flounder?

Let’s start by gathering the ingredients we need to make Stuffed Flounder. In Chef Speak this is called the “Mise en Place” which translates to “Everything in its Place”.

*My choice of crabmeat is always from blue crabs, and while I do love fresh flounder fillets, frozen is definitely acceptable.

WHAT TYPE OF CRAB MEAT CAN I USE?

What other types of fish can I stuff with Crab Imperial?

If you want the same type of presentation, fish fillets that are thin work best.

But any fish can be topped with crab imperial. The stuffing doesn’t have to go between the fillets, it can simply go on top of the fish before baking.

How do I make Imperial Sauce?

Gently blend the sauce into the crab meat, don’t add it all in, in case you don’t need quite that much sauce.

How do I make Crab Stuffed Flounder?

Bake the Flounder stuffed with crab meat at 350 degrees F for 25-30 minutes or until you reach an internal temperature of 165 degrees.

*If you want the top to be extra brown make the last minutes under the broiler.

The nice thing about this dish is that it can be prepped ahead of time, so the only work you really have to do is pop it in the oven when your guests arrive.

Crab Imperial is a classic American dish made with crabmeat that has been combined with an imperial sauce made with mayonnaise, egg, lemon juice and old bay seasoning. It is used as a stuffing for various seafood and can be baked in small shallow baking dishes or decorative shells. No bread is used in crab imperial!

What temperature should stuffed flounder be cooked to?

The flounder itself can be cooked to 140 degrees, but the imperial crab meat stuffing needs to reach 165 degrees to be safe because it contains raw egg.

Is Flounder the same as Fluke? 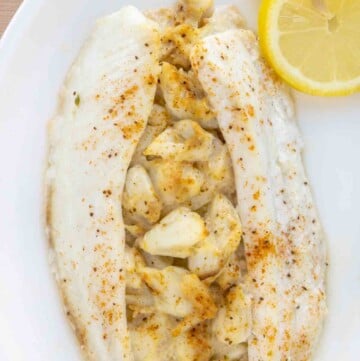