Manhattan Clam Chowder is easy to make and a lot less expensive than ordering out at your favorite seafood restaurant.

Once you get the basic soup-making skills down, the world is your oyster, or at least your clam.

For years delicious soups were a regular fixture in homes across America, but with the modern age of convenience, many homemade foods fell by the wayside. It became a lot easier to open a can than prepare the ingredients you needed to make a soup.

It’s not like making soup is rocket science. In the days of home cooking, soups were made from leftovers. Even restaurants used soups to use up leftover ingredients. And talented cooks, at home or in a restaurant knew what to add to make a soup a meal.

My Manhattan Clam Chowder is definitely a meal and really only takes about 20 minutes to prep.

Let’s start by gathering the ingredients we need to make Manhattan Clam Chowder. In Chef Speak this is called the Mise en Place which translates into Everything in its Place.

WHAT KIND OF CLAMS SHOULD I BUY?

If fresh clams are open, they’re dead and you don’t want to eat them. I would also be wary if there is a strong odor coming from the clams, while it could just be just one stray clam stinking up the whole bunch, you need to be careful. Its natures way of telling you to find something else to eat.

Do I have to use Fresh Clams to make Clam Chowder?

No you don’t. Frozen clams are also an option, although with just the clam meat, you’ll have to buy clam juice to add to the soup.

While they’re not quite the same as fresh clams, frozen is good alternative. Especially if you live in the middle of the country. And if all else fails there’s always canned chopped clams and clam broth.

**Use 8-10 ounces of frozen clams in making this soup

How do I make Manhattan Clam Chowder?

In a 4- 6 quart soup pot cook the bacon until almost done (about 5-6 minutes). Reduce the heat to medium and add the onions, celery and carrots and continue cooking for 7-10 minutes.

The next step is adding the stock, tomatoes, potatoes and thyme. Bring to a boil and reduce to simmer. Let chowder simmer for one hour.

**Skim the oil off the top of the soup and discard

After the soup has simmered for an hour, add in the clams. Bring the chowder back to a boil, then reduce heat back to a simmer.

Serve this hearty soup with crusty bread and watch the smiles at your table! There’s nothing a like a good soup to warm your body and your soul. 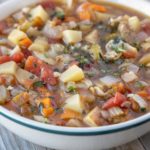 Print Recipe Save Saved!
5 from 34 votes