New England Clam Chowder is a true American Classic that’s hardly ever made at home these days.

Clams were abundant in the North East area of the United States and clam chowders and stews could be found cooking on the stoves in many New England households.

But with the advent of canned soups, America stopped making homemade soups and most seafood soups became an extravagance we only got to enjoy on those special occasions when we would dine out.

And the truth is New England Clam Chowder is not difficult to make or time-consuming. You only need a few ingredients you won’t already find in your kitchen.

Clams of course is one of those items. These days most supermarkets carry fresh clams regularly and some even carry frozen clam meat. Both of which make excellent soups.

Although with the frozen clams you’ll also need to buy clam juice.

What Kind of Clams should I buy?

What Ingredients do I need to make New England Clam Chowder?

Let’s start by gathering the ingredients we need to make New England Clam Chowder. In Chef Speak this is called the Mise en Place which translates into Everything in its Place.

How do I make New England Clam Chowder?

In a 4- 6 quart soup pot cook the bacon until almost done. Add the onions, celery and carrots and continue cooking for 5-6 minutes.

Reduce the heat to low and add the flour to the pot to make a roux. This will thicken the soup.

Allow the roux to cook over low heat for 5- 7 minutes, but don’t let the roux get dark or burn.

Heat the stock in a saucepan while the roux is cooking. Add the hot stock to the roux and mix well using a wire whisk.

Add the potatoes and fresh thyme into the pot at this time stirring them into the soup.

Now add the milk and if you’re feeling decadent, the heavy cream. Allow the soup to simmer over low heat for about an hour.

**If the soup gets to thick, add water to pot. I wouldn’t add any more dairy at this point, just water.

Before serving the chowder, add in the chopped clams and simmer for 5 additional minutes to bring the soup back to temperature. Serve with crackers, oyster crackers or fresh crusty bread and enjoy!

*Some folks enjoy hot sauce with their chowder.

Yes you can. You may need to add a little water to the soup when reheating.

Why is it called New England Clam Chowder?

Originally made in the Maine and Massachusetts area and food historians believe that French or Nova Scotian settlers introduced the soup to the area, thus lending to the name of New England Clam Chowder.

Can I use canned clams to make New England Clam Chowder?

Yes, you can. Canned clams are a great alternative to fresh clams when fresh clams are not readily available. Make sure to buy extra clam juice when purchasing canned clams, to help make the chowder. 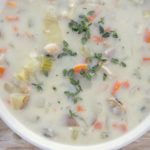 Print Recipe Save Saved!
5 from 36 votes

Making delicious restaurant-style soups in your kitchen isn't difficult. It's all about the ingredients and a few simple techniques. And my New England Clam Chowder is a perfect example of a restaurant-style soup that you can make in your own kitchen for your family and friends.
Prep Time20 mins
Cook Time1 hr 30 mins
Total Time1 hr 50 mins
Course: Soup
Cuisine: American
Servings: 8
Calories: 337kcal
Author: Chef Dennis Littley

Many supermarkets carry frozen, chopped clam meat in 1-pound containers. This is a better choice than canned clams. Just be aware that most frozen chopped clams come from China or Indonesia. If using frozen clams, allow to fully thaw before adding to the soup.  You’ll also need jarred clam juice if you use frozen clams.,