When the heat is on, I eat ice cream, or in this case gelato. Try two summer favorites that are bursting with fresh fruit flavor, Blueberry Cheesecake and Very Cherry Gelato.

One of Lisa’s favorite ice cream flavors is Bing Cherry Vanilla. And since cherries seem to be everywhere in the market I thought a Very Cherry Vanilla would be a good flavor to make. The Gelato turned out great, the only problem was the color, not quite pink, not quite red, luckily it didn’t effect the flavor at all, the Very Cherry Gelato was delicious!

For those of you that have never made Gelato, there are really two differences between Ice Cream and Gelato,  one is a Gelato maker does not put as much air into the finished product, leaving a denser product with concentrated flavors. The other difference is that milk is used instead of heavy cream, which also allows the flavors to be more prominent, not masked by the richness of the cream. I think I also tend to use less sugar, which also lets your taste buds concentrate on the flavor of the gelato rather than the sweetness. At least that’s my take on it.

There are a lot of inexpensive ice cream makers on the market, which is what I started with but not having a large freezer, having to store the bowl in the freezer every time I wanted to make ice cream really put a damper on my ice cream making. Last year I decided it was time to buy a unit with its own freezer, and the fact that I didn’t have a lot of extra room for yet another kitchen gadget, and not wanting to break the bank I ended up buying a Delonghi GM6000 Gelato maker on Amazon. The ratings on the gelato maker were really good and as far as gelato makers go, it was a lot less expensive than most on the market, you’ll be happy if you get one.

Since my gelato maker has its own refrigeration unit, I can make one batch after another, and after getting the Very Cherry done, I thought I’d be patriotic and make a blue ice cream as well. I wanted to change up the recipe a little,  so I thought I’d be adventurous and make a Blueberry Cheesecake Gelato….let’s just say that it came out better than I expected! Two delicious frozen treats to celebrate National Ice Cream Month, Very Cherry and Blueberry Cheesecake Gelatos!

Yes, you can. The difference between the two machines is gelato is churned at a much slower rate than ice cream, incorporating less air and leaving the gelato denser than ice cream. The recipes generally use milk instead of cream allowing the flavor of the gelato to be more prominent.

What Other Flavors of Gelato are Easy to Make?

If you love Gelato as much as I do, you may also like these recipes: 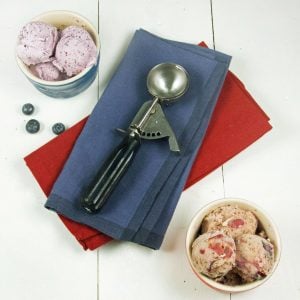