*It also works well in an ice cream maker

When I was in Italy, I just couldn’t get enough Gelato! I don’t care what time it was, or how cold it was, it was always time for gelato, but when I’ve tried it in the states (with very few exceptions) it just didn’t taste right.

The flavor might have been there, but the texture was wrong, it was just never quite right.

Over the years I have attempted to make my own gelato always blaming the fact that it didn’t come out right on my ice cream maker. The truth is it was the recipe I was using.

And yes I did also buy a gelato maker…..boys and their toys..sigh.

Technically speaking “Real Gelato” is made differently than Ice cream. It’s denser and creamier, and the flavors are more intense than regular ice cream. The reason for this is due to a very important ingredient – air.

When making gelato, air is prevented from blending into the mixture. This creates the denser and more intense flavors that gelato is so popularly known for.

To keep the intensity of the flavors, traditional gelato is made using more milk than cream. Some recipes won’t include cream and some even use part water. So when I worked on my recipe I decided to blend milk with some cream to get the consistency I wanted while not sacrificing the intense gelato flavor.

I also found recipes with eggs,  and while I do love a good custard-style ice cream, this was Gelato not ice cream and the addition of eggs only seemed to complicate the recipe and detract from the gelato flavor.

What ingredients do I need to make Strawberry Gelato?

Let’s start by gathering the ingredients we need to make Strawbery Gelato. In Chef Speak this is called the “Mise en Place” which translates to “Everything in its Place”.

I used the Kitchen Aid Ice Cream Maker attachment to recreate my original recipe when I redid this post and was very happy with the results. So don’t feel you need to go out and buy a gelato maker. Your regular ice cream maker will work well too.

How do I make Strawberry Gelato?

Pour the mixture into a gelato or ice cream maker and freeze following the manufacturer’s instructions. When the mixture is thickened and frozen, move it to a freezer-safe container and allow it to fully freeze (2-3 hours).

Serve up this amazingly delicious gelato and

If you’re looking for a gelato maker these are the two I recommend.

Both machines can be set to make a variety of frozen treats including Gelato. 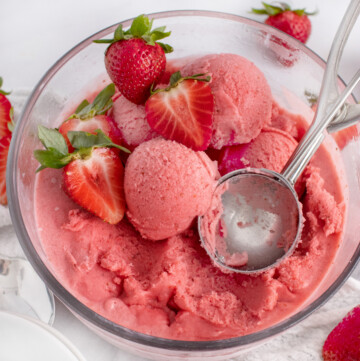