I once had someone describe my French Silk Pie as “heaven on a plate”.

This creamy, rich, chocolaty dessert is also known as Chocolate Silk Pie. And although it’s not as heavy as chocolate mousse it’s every bit as decadent and delicious.

There really aren’t words to describe just how delicious this French chocolate silk pie tastes. The addition of the oreo crust to my French Silk Pie Recipe adds another layer of chocolate goodness to my chocolate pie taking it to another level of deliciousness.

*For a more dramatic effect, use chocolate curls.

What ingredients do I need to make a Chocolate Silk Pie?

Let’s start by gathering the ingredients we need to make Chocolate Silk Pie. In Chef Speak this is called the “Mise en Place” which translates to “Everything in its Place”.

How to Make an Oreo Crust

If you’d rather have a flaky pie crust or graham cracker crust, both work really well with this dessert. If you’d rather not use the oreo filling, add another 10 wafers and 2-3 additional tablespoons of melted butter.

How to melt chocolate

Make the chocolate filling for a French Silk Pie

*Bittersweet chocolate (not unsweetened chocolate) is the best choice for this chocolate pie. Semi-sweet chocolate will also work with this recipe it just won’t be as strong a chocolate flavor, which isn’t necessarily a bad thing.

How to make assemble a French Silk Pie

Refrigerate the pie for at least 6 hours so it can set up. Overnight is best.

Before serving sprinkle the top of the chocolate silk pie with shaved chocolate or chocolate curls.

This French Silk Pie is one of my favorite pies and one I make when I want to impress my guests. It’s a decadent, rich dessert that’s perfect for a dinner party, brunch or just to make dinner a special event.

What is the difference between French silk pie and chocolate cream pie?

The American chocolate cream pie is a homestyle version of this French classic dessert. While Classic American Chocolate Cream Pie has more of a pudding-like consistency, the French Chocolate Silk Pie has a silkier, smoother texture.
The French version is also much richer and decadent, getting its silky texture and rich flavor from heavy cream and butter.

Why is it called a French Silk Pie?

This delicious pie got its name because of how silky and smooth the chocolate is. I promise, one bite and you’ll agree that this is the smoothest and best chocolate pie you’ve ever had.

Are there raw eggs in French Silk Pie

There are no raw eggs in my version of a French Silk Pie, and it is not advisable to eat raw eggs that are incorporated into any food product that isn’t cooked. 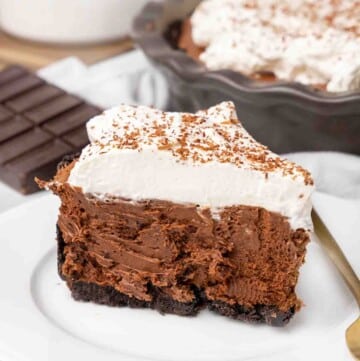 Print Recipe Save Saved!
5 from 88 votes

If you’d rather have a flaky pie crust or graham cracker crust, both work really well with this dessert. If you’d rather not use the oreo filling, add another 10 wafers and 2-3 additional tablespoons of melted butter. For a graham (or chocolate graham crust) use 20 graham crackers with 5-6 tablespoons of melted butter to make the crust for the chocolate silk pie.