I promise this will become one of your favorite pumpkin desserts!

If you love pumpkin my pumpkin crunch cake is another of my favorite pumpkin desserts.

Fall is definitely my favorite season, with cool nights and all the deliciousness that comes with the season.

My Pumpkin Cheesecake is delicious by itself but it’s over-the-top delicious with the addition of my praline topping! And let’s not even talk about how ah-mazing your kitchen will smell while it’s baking.

What ingredients do I need to make a Pumpkin Cheesecake?

Let’s start by gathering the ingredients we need to make Pumpkin Praline Cheesecake. In Chef Speak this is called the “Mise en Place” which translates to “Everything in its Place”.

How do I make a graham cracker crust?

How do I make a Pumpkin Cheesecake?

*You can substitute pumpkin pie spice for the cinnamon and allspice.

How do I make a Pecan Praline topping?

When ready to serve, carefully run a knife along the inside edge of the spring form pan and slowly release the spring.

For an added touch, garnish the pumpkin praline cheesecake with sugared cranberries.

Serve up this delicious pumpkin cheesecake with homemade whipped cream and watch the smiles around the table!

How to make whipped cream

It’s easy to make your own whipped cream by adding 1 cup of heavy cream, 1 teaspoon of vanilla extract, and 1 tablespoon of sugar to a mixing bowl. Mix at a slow speed, gradually increasing the speed of the mixer over 6-8 minutes until you get stiff peaks. The cream and the mixing bowl should be very cold. 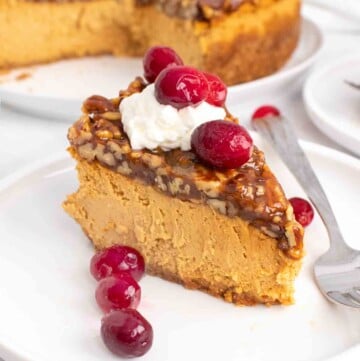