Penne alla Vodka is a rich creamy tomato sauce that takes pasta dishes to a whole new level of decadent deliciousness. The heavy cream and grated Romano cheese along with the sweet San Marzano tomatoes add layers of flavor to this pasta sauce.

You’ll find many variations of this recipe on the internet, most adding sugar, and some adding meat. You really don’t need any extra ingredients or an overabundance of onions, shallots or garlic to make this easy pasta recipe.

I’m sure you’ll agree that this simple sauce truly is the best Penne Vodka Sauce you’ll ever make after tasting this dish.

The short answer is no, it isn’t. It was created by a New York Chef in the seventies and is a gimmicky take on Pasta with Rosa Sauce, which was created in Italy long before the vodka version became popular.

But as things go, Penne alla Vodka actually became a trendy dish in Italy during the eighties. And since the Italians did come up with the Rosa Sauce long before Penne alla Vodka came into being, they pretty much claim to be the originators of the sauce.

Let’s start by gathering the ingredients we need to make Penne alla Vodka. In Chef Speak this is called the “Mise en Place” which translates to “Everything in its Place”.

Is Vodka really needed to make this dish?

Technically to be called a vodka sauce, vodka needs to be in the sauce. But in this chef’s opinion, it’s a waste of good vodka. You could use a little wine, but truth be told a little of the pasta cooking water will help the texture of the sauce achieve the right consistency.

In my younger wilder days, I was a serious vodka drinker, and honestly who really likes the flavor of vodka? It won’t hurt the sauce, but it really won’t help the sauce, so it’s entirely up to you if you want to add vodka to your sauce.

How to make Penne alla Vodka

When the sauce is simmering, begin cooking the penne for the dish.

Bring a large pot of salted water to a boil and cook the pasta according to package instructions. Drain the cooked pasta well reserving ½ cup of pasta cooking water.

To make a quick Vodka Sauce aka Rosa Sauce simply add cream, grated romano cheese, and fresh chopped basil to a tomato sauce. It can be homemade tomato sauce or store-bought. It’s easy to put together and makes a delicious quick weeknight dinner.

Serve the Penne alla Vodka, garnishing the dish with fresh chopped parsley and additional grated cheese. Remember that people eat with their eyes first so make the plate pretty.

If you’d like to kick up this dish, add chicken tenders, shrimp (grilled, baked or sauteed) or your favorite veggies to the sauce. You may need to build the sauce out a little to make up for the added ingredients but that’s easy enough to do with a little more cream or crushed tomatoes.

Why do I use Vodka in Penne alla Vodka?

Allegedly it helps maintain a cohesive texture allowing the sauce to emulsify properly. But as all the alcohol burns off, you’re not really left with much to help with emulsification. White wine would also work with the same results. Vodka is also supposed to enhance the tomato flavor, but I’ve never noticed it. So if you want to leave the vodka out, it’s really going to make a difference in the saue.

Some might, but for the most part, a simple Rosa Sauce is what you’ll see gracing the tables in Italy if you see any type of creamy tomato sauce. A Rosa Sauce is exactly the same, it just doesn’t include vodka.

Is a pink sauce the same as a vodka sauce?

It is basically the same. Some say a pink sauce is mixing tomato sauce with an alfredo sauce, but since a real alfredo sauce doesn’t include cream, I don’t think that is the case. A pink sauce is also referred to as a rosa sauce, which in essence is a vodka sauce without the vodka. 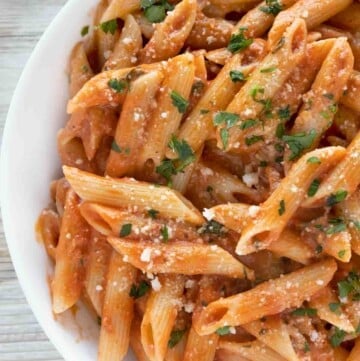 Print Recipe Save Saved!
5 from 47 votes