Bread Pudding is comfort food, and this holiday season my Cranberry Eggnog Bread Pudding, warm out of the oven will have everyone loving my seasonal take on this American Classic.

Eggnog has been a family tradition from my father’s side (English/Irish) that has been continued over the years and has finally found its way into desserts that I’ve been sharing. My Eggnog Gelato is another delicious example.

Tart cranberries are the perfect addition to this rich and somewhat decadent dessert, topped with creamy, melty cream cheese frosting….sigh. Eggnog Cranberry Bread Pudding may not have been on your Holiday Baking list, but I assure you after one bite, it will become a favorite!

Let’s start by gathering the ingredients we need to make Cranberry Eggnog Bread Pudding. In Chef Speak this is called the “Mise en Place” which translates to “Everything in its Place.”

Made with simple pantry ingredients:

One of the major problems with most bread puddings is there’s not enough liquid in the mixture.

I know you’ve all had the bread puddings that could double as a doorstop and that’s because there was not enough milk to keep the texture like pudding.

The other issue I sometimes see is the omission or simply not enough eggs to make the custard. This is really essential with the additional liquid. Think egg custard with bread in it.

As you can see from my bread pudding pictured above the egg nog mixture almost came up to the top of the baking dish. Allowing it to soak in before baking helps as well.

When it comes out of the oven, it’s puffed up really nicely and as it cools it will set back down to the level of the dish or a little lower. This is normal.

You don’t have to allow it to cool down completely, and warm is even better. The only problem you’ll have is the shape of the pudding. I promise no one will care what it looks like once they taste it.

Allowing it to cool down completely will let it keep its shape, but it’s best right out of the oven.

Anyway, you serve it, I promise you your guests are going to be ah-mazed at the flavor and the originality of the dessert. If cranberries aren’t your thing, try blueberries, it’s equally delicious, just not quite as festive.

Here is the link for the original version of my Classic Bread Pudding.

Why do they call it bread pudding?

Bread pudding can trace its roots to the early 11th and 12th centuries. Nothing could be wasted in those times and cooks looked for ways to use stale, leftover bread instead of letting it go to waste. It became known as the “poor man’s pudding” and now it’s simply delicious comfort food!

You simply didn’t use enough milk and egg mixture if your bread pudding is dense and heavy. Eggs make it rich and light; think of it as custard being poured over the bread.

Can I freeze bread pudding?

Yes. you can. Double-wrap it in plastic wrap and foil. Don’t add the topping until it’s defrosted and reheated. 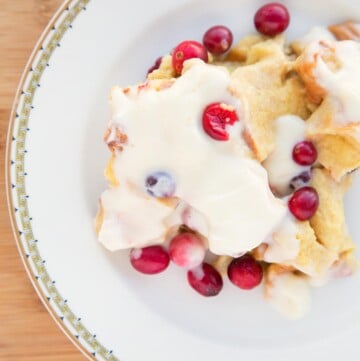 Print Recipe Save Saved!
5 from 19 votes