Have you ever had Blueberry Bread Pudding?

If not, you’re going to love my blueberry bread pudding! One of my signature desserts has always been bread pudding. I learned to make it early on in my career and there are few that ever come close to this amazingly simple dessert.

I’m sure you’ve had bread pudding many times in your life and most end up being so dense and heavy that they need to be smothered in an over the top sauce just to make them palatable.

And that’s really a shame because bread pudding should be light, creamy and delicious even without a sauce.

What Kind of bread should I use when making bread pudding?

I would say just about any white flour bread item would work. Rye or any other strong-flavored bread, or seeded bread would be a little too much for this dessert. Although a tasty 11-grain bread could make a very interesting bread pudding.

Using potato or white bread for the pudding allows it to stand on its own and the sauce simply accents the light fluffy texture and flavors.

How do I make Blueberry Bread Pudding?

To make the custard mixture, gently beat the eggs, then add the milk, sugar, cinnamon and vanilla. Continue to whip using a whisk until the sugar has been fully incorporated.

Bake the blueberry bread pudding for one hour at 350 degrees.

Then uncover the bread pudding and continue to bake for 15 minutes more or until the center is fully set. (if the butter has pooled in any area, spread it around before the final 15 minutes…this will help get it golden brown.)

How do I make Creme Anglaise?

*The Creme Anglaise should be thick enough that when you run your finger through a coating on a spoon it remains separated.

What is the best topping for bread pudding?

I started out making my legendary bread pudding with a cream cheese frosting but for this recipe, I wanted to change things up a bit.

Blueberries found their way into this version of bread pudding when I noticed a pint of fresh blueberries in the fridge.

I didn’t want to overpower the blueberries in this dessert so I decided to make Creme Anglaise instead of my classic cream cheese frosting. It was a good choice.

This would also be amazing served with vanilla ice cream or simply homemade whipped cream. But way, you serve it, serve warm from the oven and I promise you’ll get rave reviews! 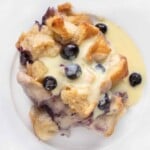 **do not get the creme anglaise too hot and don’t be tempted to leave it on too long to try and continue to thicken. It will break and be unusable if it heats too long.