Do I have your attention?

I’m going to warn you ahead of time unless you have better self-control than I do, you may find yourself going back for another slice. And don’t forget a glass of cold milk to go with it!

Did you know that German Chocolate Cake, isn’t from Germany? In 1852 Samuel German an English American Baker who worked for Baker’s Chocolate Company, where he created a new type of sweetened dark baking chocolate. This chocolate was named Baker’s German’s Sweet Chocolate after its creator.

If you’re a chocolate lover my Chocolate Mousse Cake is another of my favorites.

105 years after the creation of German’s Sweet Chocolate, The Dallas Morning News published a cake recipe by a Texas homemaker, Mrs. George Clay. She called her recipe “German’s Chocolate Cake” because it used that brand’s sweeter variety of chocolate.

General Foods, the owner of Baker’s Chocolate Company at the time, noticed the recipe and distributed it throughout the country. Many publications decided to switch German’s to German making the widely recognized title German Chocolate Cake.

What Ingredients do I need to make a German Chocolate Cake?

I changed up the original recipe a bit swapping out the bakers melted chocolate for unsweetened cocoa. The cocoa powder adds an incredible depth of flavor and rich chocolate color to this classic cake.

Let’s start by gathering the ingredients we need to make German Chocolate Cake. In Chef Speak this is called the “Mise en Place” which translates to “Everything in its Place”.

How do I make a German Chocolate Cake?

How to make German Chocolate Frosting

Let the coconut pecan frosting cool completely before using it to assemble the cake.

How to make a Chocolate Buttercream Frosting

When the chocolate frosting is completed you can begin assembling the German Chocolate Cake.

How to Assemble a German Chocolate Cake

When it comes to German Chocolate Cake this is a great recipe! I know you’ll find many out there, but trust when I tell you this could just become your new favorite cake.

Why is it called a German Chocolate Cake?

In 1852 Samuel German an English American Baker who worked for Baker’s Chocolate Company, where he created a new type of sweetened dark baking chocolate. This chocolate was named Baker’s German’s Sweet Chocolate after its creator.
When the cake was created by a Texas homemaker, Mrs. George Clay. She called her recipe “German’s Chocolate Cake” because it used that brand’s sweeter variety of chocolate named after Samuel German.

Why should I use cocoa instead of melted chocolate to make a German Chocolate Cake?

The answer is simple, if you love chocolate, cocoa will give you a richer, darker and more flavorful cake. Melted chocolate will make a milder, lighter cake which will be lost against the coconut pecan frosting.

Does a German Chocolate Cake need to be refrigerated?

No, it does not. You can keep the cake in an airtight container at room temperature for up to five days. You can refrigerate the cake, but it needs to have time to warm up before serving. 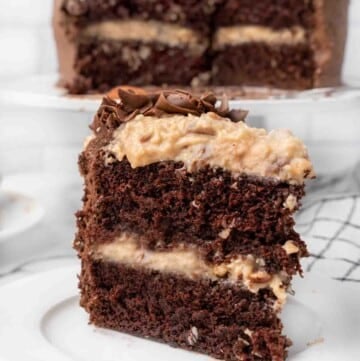 Print Recipe Save Saved!
5 from 41 votes