Have you ever heard of a Bee Sting Cake?

According to Wikipedia: “this traditional Bavarian dessert may have earned its name from its honey topping: according to one legend, a bee was attracted to it, and the baker who invented the cake was stung. Another source cites a legend of German bakers from the 15th century who lobbed beehives at raiders from a neighboring village, successfully repelling them, and celebrated later by baking a version of this cake named after their efforts.”

Hence the name Bienenstich, which translates to Bee Sting.

But whatever you decide to call this cake, I can promise you, your friends and family will be calling it delicious and asking for seconds!

The cake isn’t quite like any American cake you may have had. It has more of a pastry texture, filled with pastry cream and topped with honey glazed almonds.

Pastry cream might sound daunting, but it really isn’t difficult to make.

What ingredients do I need to make a Bee Sting Cake?

Let’s start by gathering the ingredients we need to make a Bee Sting Cake. In Chef Speak this is called the “Mise en Place” which translates to “Everything in its Place”.

How do I make a Bee Sting Cake?

The first step is making the pastry cream for the cake.

When it boils, whisk mixture constantly for another 30 – 60 seconds until it becomes thick. Remove from heat and immediately whisk in the liqueur (if using). Stir in vanilla bean extract, or extract) Pour into a clean bowl and immediately cover the surface with plastic wrap to prevent a crust from forming.

Cool to room temperature. If not using right away refrigerate until needed, up to 3 days. Whisk or stir before using to get rid of any lumps that may have formed.

Next is the pastry dough for the cake.

The brioche dough isn’t too complicated to make and is what makes the Bee Sting Cake so special.

If you have a stand mixer, it’s really easy to do, but you can mix this, by hand, because the dough isn’t as thick as bread dough.

Warm the whole milk and honey to 110 degrees F. (any hotter will kill the yeast). Add the active dry yeast to the mixture and wait 10 minutes. The mixture will become foamy and is ready to make the dough.

Place the dough into a buttered bowl, and cover with plastic wrap. Allow the dough to double in volume (it should take about 2 hours). Gently press the dough down, and knead a few times (with floured hands). Cover and refrigerate for at least 4 hours, and up to 12 hours.

**If the dough appears too wet add 2-3 tablespoons of bread flour to the mixture. Some of the issues seem to be with the metric equivalents.

When the dough is ready place the dough into a 9” buttered springform pan. Shape into a ball, and gently, press the dough to fit the pan.

Cover and allow it to the dough to rise in a warm environment for about an hour. Start making the honey-almond topping

Preheat the oven to 350, when the dough has risen.

What Ingredients do I need for the Honey-Almond Topping?

For the topping you’ll need sliced almonds, butter, honey, sugar and a pinch of salt.

Combine the unsalted butter, sugar, honey and salt in a small pan.

Bring the mixture to a gentle boil, on the stovetop, then remove from the heat. Add the sliced almonds and pour the mixture over the dough.

Place the pan on a parchment-covered baking sheet (the honey mixture will seep through the bottom) and bake for 22-25 minutes, until golden and bubbly. Place the finished cake on a cooling rack and allow to cool for 10 minutes.

After 10 minutes remove from the cake from the pan.

The aroma of the cake is intoxicating and there is a beautiful sticky caramelization on top and all around the cake. You’ll be tempted to cut into the cake but it’s important to let the cake cool, completely.

After the cake has fully cooled, carefully slice the cake in half, with a serrated knife. Spread the pastry cream on top of the bottom half, covering it with the top half of the cake. Now it’s ready to serve.

Like most European cakes, the Bee Sting Cake is not very sweet. The pastry texture of the cake goes well with the mildly sweet pastry cream. But the honey almond topping is what takes this cake to the next level. The butter in the topping gives a delicate richness that perfectly finishes this Bavarian classic.

*Make sure to use a sharp knife to slice the cake.

Kitchen tools I use for my cakes 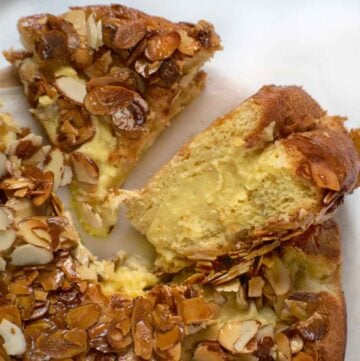 You can make the pastry cream and prepare the dough a day of ahead of time.