Garlic Oysters were one of the most popular appetizers on my restaurant menu years ago at the Jersey Shore. You may not find these on many menu’s but this restaurant classic is sure to be a welcome addition to your dinner table for the holidays and beyond.

Oysters have always been popular but it seems that they’ve become the most sought after seafood item in many restaurants. No longer reserved for special occasions more people are enjoying oysters at their favorite restaurants.

And the truth is you can buy oysters for a lot less than you’ll get charged at restaurants and the hard part of opening oysters isn’t as difficult as you think.

What do I need to make Garlic Oysters?

Let’s start by gathering our ingredients for this dish. In chef speak we call that the Mise en Place loosely translated into everything in its place. The ingredient list is short with the stars of the dish being the oysters and garlic butter. You can add your favorite seasoning and make these delicious mollusks just how you like them.

If you’re staying away from butter (gasp) you can use your favorite butter substitute instead.

Do I need to clean Oysters before opening?

Before opening the oysters place them in a bowl and allow cold water to run over them for about 5 minutes as you gently toss the oysters in the bowl. Dump the water out every now and then to make sure it is as clean as possible. When the water starts running clear you’re good to go.

Lay the oyster flat in your hand and hold it in place. Insert the tip of the oyster knife into the “hinge” at the back of the oyster and gently twist the edge of the knife to pry it open. Carefully cut the muscle away from the shell by sliding the knife horizontally along the inside top of the shell. This method is really not difficult if you happen to have an oyster knife.

Start at the front or side of the oyster (not the hinge) and gently insert the knife between the line where the top and bottom shells meet. Once it starts to open, twist the knife 90 degrees and cut the adductor muscle that connects the top and bottom shells. I tried this method and although some folks think its pure genius I see it as a way to get some pretty nasty cuts on your hands. I don’t recommend this method.

The third (and recommended) method is using a flat head screwdriver.

Lay the oyster flat in your hand and hold it in place. Insert the tip of the screwdriver into the “hinge” at the back of the oyster and rotate the handle to pry open the oyster. At this point, you’ll need a pairing knife to cut the muscle away from the shell by sliding the knife horizontally along the inside top of the shell.

The fourth method is using heat.

Place the oysters in a microwave-safe bowl and cover them tightly with plastic wrap. Microwave the oysters on high until shells open slightly. This should take about 1 to 1 ½ minutes.

Remove the oysters as they start to open (discard any that do not open). Hold the partially opened oysters with hinge toward you, insert a paring knife between shells near the hinge, and twist the knife to open the oyster. Then carefully cut the muscle away from the shell by sliding the knife horizontally along the inside top of the shell and fully open the oyster.

You can also place the oyster on a grill the direct heat will also open the oyster.

**With all the Methods**

After opening your oysters with one of the methods and removing the top shell, run the paring knife under the oyster and cut the muscle loose. Flip the oyster over and you’re ready to serve them on the half shell or stuff them.

Add the butter and garlic to a heavy saucepan and allow it to simmer on low for 5 minutes. After the garlic has simmered, add the seasonings and chopped parsley to the pan. Place the garlic butter mixture in a bowl and allow it to chill to harden. Stir the butter from time to time to keep all the ingredients mixed.

When the butter is somewhat hardened, add a small spoonful of the mixture to the top of each oyster.

Then sprinkle the topped oysters with grated Romano cheese. The oysters can be refrigerated after stuffing, so you can make them ahead of time.

When purchasing any seafood, shellfish especially, look for a safe food source. If the oysters are open prior to opening before their use, discard them.

How do you cook garlic oysters?

Top each oyster with garlic butter, then place the oysters on a baking sheet. Place on the center rack of a preheated 400-degree oven for 15-20 minutes or under the broiler for 3-5 minutes.

Can I grill garlic oysters?

Can you freeze garlic oysters? 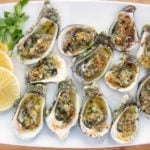 Oysters have been gaining popularity in restaurants all over the world and serving them in your home isn't as difficult as you might think. My garlic oysters are a restaurant classic that you'll enjoy time and time again once you see how easy they are to make.
Prep Time20 mins
Cook Time15 mins
Total Time35 mins
Course: Appetizer
Cuisine: American
Servings: 12
Calories: 72kcal
Author: Chef Dennis Littley