Beef Short Ribs are often overlooked when it comes to barbecue, but they shouldn’t be. Packed with flavor, it’s easy to see why this cut of beef is prized by chefs and often used in creating delicious specials that almost melt in your mouth.

That’s exactly the type of tenderness and flavor you can expect from my bbq beef ribs recipe.

Let’s start by gathering the ingredients we need to make BBQ Short Ribs. In Chef Speak this is called the “Mise en Place” which translates to “Everything in its Place”.

Made with simple pantry ingredients

How do I make Tender BBQ Beef Ribs?

Place the covered seasoned beef short ribs in the refrigerator to marinate for 2-4 hours.

When the oven temperature has reached 275° F., place the foil pouch of short ribs on the center rack of the oven. Cook the ribs for 3 ½- 4 hours, until you’ve reached an internal temperature of 205° F. or until the bone starts to separate from the meat.

How to cook bbq short ribs on the grill:

Follow the instructions above through the marinating process. To grill the ribs make completely sealed foil packets; instead of using the covered tray using double layers of foil.

*You can also finish the ribs without barbecue sauce.

Broil the BBQ short ribs on low for 3-4 minutes until the sauce gets bubbly and begins to caramelize.

*Make sure to keep an eye on the ribs. The barbecue sauce will burn quicker than you think.

My Easy BBQ Beef Ribs were incredibly flavorful thanks to the seasoning mixture used and were also very tender. And when I said this was an easy recipe, I wasn’t kidding.

Just a few minutes of prep work is all that’s needed to make the most tender fall-off-the-bone bbq beef ribs.

The meat just pulled off the bone using a fork to separate it. Adding some of the liquid from the pan after shredding the beef, will help keep the meat moist.

Pulled beef from short ribs makes delicious tacos and sandwiches and is an amazing addition to mac and cheese!

What temperature do short ribs need to be cooked, to be fall off the bone tender?

Beef short ribs are the most tender when the internal temperature of the ribs reaches around 200 – 205° F. Use an instant read thermometer to make sure the ribs have been cooked long enough.

What is the best temperature to cook ribs at?

I have found that cooking beef or pork ribs at 275° F is the perfect temperature for cooking ribs low and slow, making them fall off the bone tender.

How long should ribs cook for in the oven?

At 275° F, beef short ribs will take 3 ½- 4 hours to fully cook. Increasing or lowering the oven temperature will affect the overall cooking time. 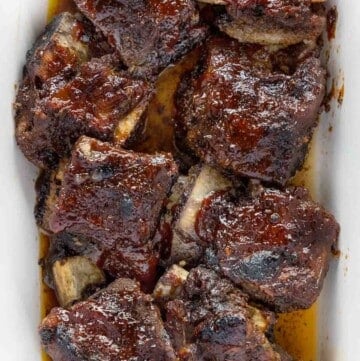 Print Recipe Save Saved!
5 from 52 votes