When it comes to restaurant appetizers I don’t think anything is ordered more often than Shrimp Cocktail.

And my classic version boasts big, plump, succulent, perfectly-cooked shrimp that is so easy to make that you’ll never look at this appetizer the same way again.

Follow my recipe to make this restaurant-quality shrimp cocktail with a classic lemony-horseradish cocktail sauce that never disappoints!

What ingredients do I need to make shrimp cocktail?

Let’s start by gathering the ingredients we need to make a Restaurant Style Shrimp Cocktail. In Chef Speak this is called the “Mise en Place” which translates to “Everything in its Place”.

What kind of Shrimp should I use to make shrimp cocktail?

The biggest issue with making a really outstanding shrimp cocktail or any shrimp dish at home is the type of shrimp that are used.

Believe it or not many restaurants use precooked, shelled and deveined frozen shrimp for their shrimp cocktail. And without even mentioning the quality issues, the real problem comes in when they defrost the already cooked shrimp.

For a precooked frozen shrimp to be edible, it has to be served within minutes of thawing. The longer it sits, the worse the texture gets and the lack of flavor becomes more noticeable.

If you can’t taste the shrimp because of all the cocktail sauce you put on it, don’t waste your money.

The best shrimp to use for shrimp cocktail will be caught in the Gulf of Mexico, the Atlantic Ocean on the east coast of the US, and the Pacific Coast of the US. You can also get amazing shrimp from Australian waters and from parts of the European Union.

*Shrimp are almost always frozen when processed onboard ships. If you see shrimp that aren’t frozen, it’s a good bet they were frozen and thawed to put on sale.

The shrimp you need to avoid like the plague will be originating in Asian, Indonesian, and Indian waters. And for the most part, any shrimp that’s farmed is not a good choice.

As with everything, there will be exceptions to the rule, but for the most part, these are not the shrimp you want to eat.

What size Shrimp should I use?

When it comes to shrimp cocktail, the bigger, the better (within reason) is the rule of thumb. I use 16-20 count shrimp. That means that you’ll get 16-20 shrimp per pound (also referred to as Jumbo Shrimp). And that includes the shell in the weight. If you can find them and want to splurge U-15 shrimp (under 15 to a pound) are the best choice. Any larger than that and they start to get a little tough.

*Usually, when you find large shrimp advertised in a grocery store they’re a 26-30 count

Pink or White shrimp are preferable, but brown shrimp are okay as they will cook up pink. Brown shrimp can have a higher iodine content and more minerally taste. It’s not enough that most would notice, but it’s always something to be aware of.

*Brown shrimp are usually used in spicier dishes or dishes with sauces.

How do I make Shrimp Cocktail?

For my recipe, I used a 3-quart saucepan to cook the shrimp. The water was seasoned with Old Bay, pickling spice, and half a lemon with the lemon juice squeezed into the water.

Bring the water to a boil and add the shrimp.

Always cook the shrimp with the shells on and not deveined for the best shrimp cocktail.

Cook the shrimp for 3-4 minutes depending upon their size. I cooked my shrimp for 3 minutes and they were perfectly done.

If the pan is overcrowded, it could take longer. I usually let the water come back to a boil and let the shrimp cook for 1-2 minutes longer. A cooked shrimp should feel firm, not soft.

When the shrimp have finished cooking, drain them in a colander. DO NOT cool them in cold water or ice water!

*Ice water may chill them quickly, but it will also negatively affect the flavor.

Instead, add ice to a large bowl and toss the shrimp in the ice bath, allowing them to chill quickly. You can also use the colander for this process if it’s large enough.

After the shrimp have chilled, peel and devein the shrimp. Serve the Shrimp Cocktail on crushed ice with cocktail sauce and a lemon wedge. And get ready for rave reviews.

Another favorite appetizer is my Grilled Shrimp Street Tacos. Served as tacos or with tortilla chips it’s another delicious way to enjoy shrimp!

This isn’t just a homemade cocktail sauce, it’s a shrimp cocktail sauce like your favorite seafood restaurant serves. And it all comes down to the addition of an ingredient you would never have thought to add.

Chili Sauce is the secret ingredient, and not just any chili sauce will do. Heinz Chili sauce is what turns a good cocktail sauce into an amazing cocktail sauce. If you’ve wondered why the cocktail sauce you make at home is never quite as good as when you dine out, now you know.

*You can also add lemon zest or lime zest to enhance the flavors of the sauce, and lime juice instead of lemon juice can be substituted.

Mix all the ingredients together and chill for an hour or two to let the flavors develop into a delicious horseradish sauce for all your seafood dishes.

*You don’t have to use chili sauce in your cocktail sauce, it will still be good without it. 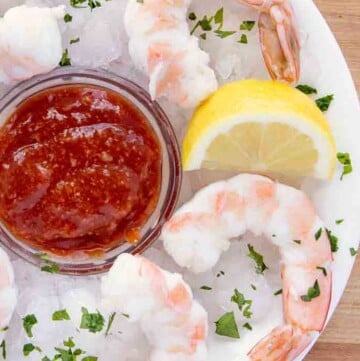 Print Recipe Save Saved!
5 from 60 votes