During my career as a restaurant chef, Oysters Rockefeller was one of the more popular appetizers on my menu.

As with most restaurant-style dishes, Oysters Rockefeller is not difficult to make and with a little prep you’ll be amazing your friends with this ah-mazingly delicious dish.

What do I need to make Oysters Rockefeller?

Let’s start by gathering the ingredients we need to make Oysters Rockefeller. In Chef Speak this is called the Mise en Place which translates into Everything in its Place.

You can’t make Oysters Rockefeller without the oysters. And ordering oysters couldn’t be easier these days. If you can’t find oysters locally, you might want to look online. I’ve been ordering my seafood online for some time now .

Start by opening the oysters and place them on a sheet pan. I saved the excess liquid for my next recipe, Oyster Stew.

Lay the oyster flat in your hand and hold it in place. Insert the tip of the oyster knife into the “hinge” at the back of the oyster and gently twist the edge of the knife to pry it open. Carefully cut the muscle away from the shell by sliding the knife horizontally along the inside top of the shell. This method is really not difficult if you happen to have an oyster knife and a cut-resistant glove.

Start at the front or side of the oyster (not the hinge) and gently insert the knife between the line where the top and bottom shells meet. Once it starts to open, twist the knife 90 degrees and cut the adductor muscle that connects the top and bottom shells. I tried this method and although some folks think its pure genius I see it as a way to get some pretty nasty cuts on your hands. I don’t recommend this method unless you have a cut-resistant glove.

The third method is using a flat head screwdriver.

Lay the oyster flat in your hand and hold it in place. Insert the tip of the screwdriver into the “hinge” at the back of the oyster and rotate the handle to pry open the oyster. At this point, you’ll need a pairing knife to cut the muscle away from the shell by sliding the knife horizontally along the inside top of the shell. Using a cut-resistant glove is recommended.

How do I make Oysters Rockefeller?

Start by melting the butter in a large saute pan. Add the shallots and saute for 3-5 minutes.

**If you want to add Pernod or white wine, add it after the spinach has wilted.

Mix in the lemon juice, cream, Romano cheese and pepper. Bring the mixture to a boil then reduce the heat and allow the mixture to cook down (reduce) by one half.

The mixture will thicken and somewhat solidify while it cools off in the fridge.

The last step before cooking is placing a tablespoon of the spinach filling on each oyster, then sprinkling panko bread crumbs on top.

Place the oysters in your preheated oven and bake until golden brown.

Once you see how easy it is to make this classic restaurant style dish, it will become one of your favorite appetizers. Can you imagine how impressed your friends and family will be when they see the deliciousness you created?

Kitchen Tools I use to make Oysters Rockefeller

If you enjoyed this recipe, you may also like these: 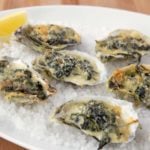 When it comes to restaurant classics, Oysters Rockefeller is the king of seafood appetizers. You can still find it on many restaurant menus, but it's slowly disappearing from the culinary scene. The truth is it's easy to make and you'll amaze your friends and family with this ah-mazing appetizer.
Prep Time20 mins
Cook Time40 mins
Course: Appetizer
Cuisine: American
Servings: 24
Calories: 82kcal
Author: Chef Dennis Littley