I’ve been making no-knead homemade artisan bread for the last 15 years and it’s always been good but never quite what I hoped it would be. It just wasn’t quite right.

Of course, it was still delicious and we enjoyed the homemade bread, but it always left me thinking it could be better.

I’ve experimented with different quantities of yeast and salt. I’ve added sugar, honey and other types of flours to the recipe in my quest for the perfect no-knead bread recipe.

Then one day I was watching a sourdough bread video, which was way too much work for a loaf of bread, but the technique that was used to knead the dough intrigued me. And I thought I would try that method with my much easier to make no-knead bread recipe.

And it was amazing! The results finally yielded the bread I’ve been hoping to make for the last 15 years. It does require a small amount of kneading but it’s pretty darn easy to make.

See all those little air holes, that’s what I’ve been missing in my no-knead bread all these years! It has a nice crisp crust, a lighter texture and a wonderful flavor.

What do I need to make Artisan Bread?

It’s a very short list of ingredients to make this perfect loaf of homemade artisan bread. All-purpose flour, sea salt, yeast and sugar are the only ingredients you need.

I use Sherpa Pink Himalayan Salt in my kitchen. The other products I use are King Arthur Flour, Active Dry Yeast and Natural Cane Sugar.

Why do I need sugar in my Bread Recipe?

That’s a good question and one I had pondered until I spoke with a master baker about what each ingredient did to make the end result in the bread I wanted.

Sugar has quite a few jobs and provides substantial improvements to yeast bread. It’s not an essential ingredient but it helps make a better loaf of bread.

Will sugar make the bread sweet?

That’s a great question and the answer is no. We are not using enough sugar to make this a sweet bread. You won’t even notice it’s in the bread.

Why do I need salt in my homemade bread?

How do I make Artisan Bread?

The process is fairly simple and only takes about 10 minutes to make the bread dough and get it set up for the first rise.

Following the recipe add the salt, sugar and yeast to the flour. Whisking it all together to make sure everything is equally distributed.

Then in a stand mixer (or by hand) add in the water. Depending upon the brand of flour you use, you may need a little less or a little more water. So start with about ¾’s of the water adding more if needed. The dough should be a little wet and sticky.

The last step is to place the bread dough in an oiled bowl and cover it with plastic wrap. Place the bowl on your counter away from drafts for the initial rise.

When the first rise is done, the bread dough should look like this. The dough may rise a little more, than fall a little. That’s normal, don’t worry.

The first step is to lightly flour a counter top and place the bread dough on the floured area. At this point you are going to begin adding additional flour to the bread until the dough is no longer wet and sticky.

You don’t want the dough completely dry, but it should be easy to work with when you’ve added enough flour. This should take you about 5 minutes.

The next steps are the folding process that will give the dough the textures and appearance we want.

A Dough Scraper/Cutter will make the process easier and will help move the dough around without touching it all the time.

Cover the dough with a bowl or damp tea towel for the second rise. Preheat your oven to 450 degrees F. and place the dough on top of the stove.

The rise time will be 30-40 minutes for the second rise.

When the bread has finished rising it should have a pillowy appearance and feel. When you shape the dough, don’t handle it any more than you have to.

The next step is cutting a design (if you want to) on the top of the bread. I used one of my kitchen knives but they never really make great cuts so I ordered a Bread Lame and Scoring Tool from Amazon. You don’t really need this, but you know what they say about a boy and his toys.

The last step before placing the bread dough in the oven is to brush the dough with water. Water helps crisp up the outer crust of the bread, making the crusty bread I love.

**If you want to add seeds to the bread, any of the wet methods will help the seeds stick to the bread.

I use an Emile Henry Cloche to bake my bread in. You can also use a Dutch oven for this Artisan Bread.

What size dutch oven should I use to bake this recipe?

To make one loaf from my recipe you will need a 7 qt. dutch oven or bigger. If you have a 5 qt dutch oven, you can reduce the recipe by one-third or make two loaves.

What if I don’t have a cloche or a dutch oven?

If you don’t have a cloche or a dutch oven, a heavy metal cake pan (round or oblong) will work. If you use a cake pan, you will do your final rise in the pan. The bread will come out a little darker because it won’t be covered.

What is the difference between artisan bread and regular bread?

Bread that is mass-produced using large machines is referred to as Supermarket Bread. Artisan bread is usually made by hand using longer and more traditional processes.

My side-by-side tests showed that my folded no-knead bread had a rounder, more appealing flavor and had a better balance between acid and sweet than the loaves without folds.

Why isn’t my no-knead bread crusty?

The main reason your bread isn’t crusty is due to moisture. This moisture comes from inside the bread. When cooling, you must give your bread enough room to breathe. Keep your bread on a cooling rack with enough space under it.

How can I make my no-knead bread even crustier?

after my bread has cooled I give it 7- 10 minutes, placed directly on the center rack in a 350-degree oven. This crisps the outside of the loaf nicely.

Can I use bread flour to make artisan no-knead bread?

Yes, you can, but not using this recipe. Bread flour has a higher protein count which means the ingredients would have to be adjusted to accommodate using bread flour.

The finished bread is golden brown, crusty and delicious. And once you get the hang of it, the process will only take minutes.

I keep a ziplock few bags of the flour and other ingredients measured out ahead of time. That makes it super easy to make the bread after dinner so it’s ready to bake in the afternoon. 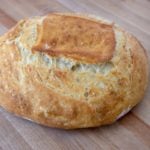 Print Recipe Save Saved!
5 from 80 votes

What could be better than a warm loaf of Homemade Artisan Bread that you made in your very own kitchen. You'll amaze your family and friends with my easy to make "almost" no-knead bread.
Prep Time25 mins
Cook Time40 mins
Course: Bread
Cuisine: American
Servings: 8
Calories: 218kcal
Author: Chef Dennis Littley

Why do I need sugar in my Bread Recipe?

That’s a good question and one I had pondered until I spoke with a master baker about what each ingredient did to make the end result in the bread I wanted. Sugar has quite a few jobs and provides substantial improvements to yeast bread. It’s not an essential ingredient but it helps make a better loaf of bread.

Will sugar make the bread sweet?

That’s a great question and the answer is no. We are not using enough sugar to make this a sweet bread. You won’t even notice it’s in the bread. *The Sugar can be left out of the recipe. I use sugar because of all the reasons listed above.  But the bread recipe will still work without it.

Why do I need salt in my homemade bread?