Who wants to try my Chocolate Chip Cheesecake Bars?

I’ve been in a cheesecake kind of mood the last few months and I’ve been experimenting with different pans as well as flavors. It’s been fun and the results have been delicious. But when you bake an extra creamy cheesecake using cream cheese and mascarpone, you can’t expect anything short of perfection.

I decided on a Chocolate Chip Cheesecake, but rather than a traditional springform pan, I used my brownie pan (it hasn’t seen a lot of action lately and it looked depressed). I also wanted to change up the crust a bit and I happened to see Toffee Sandies at the market and thought they would make an interesting crust. I love pecan sandies and the toffee sandies may have knocked them down into second place. I think toffee sandies are going on my to-do list!

Cheesecake has got to be one of the most forgiving desserts you can make. You can add just about any flavor you like, use all kinds of toppings, change the crust, use different shaped pans, but no matter what you do to it, Cheesecake still comes out oh so creamy and delicious! I don’t know who invented cream cheese but I hope there was a medal awarded for this stellar creation. 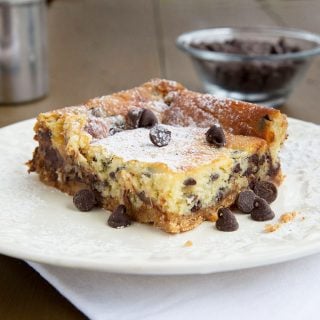 Print Recipe Save Saved!
5 from 4 votes