I love stuffing and my potato bread stuffing is one of the best I’ve ever had. It’s also one of the easiest side dishes you can make and will elevate a weeknight meal of roast chicken into a meal to remember!

Stuffing is the perfect side dish to compliment turkey or roast chicken. And I promise you’ll have lots of smiles around the dinner table when they see you’ve made stuffing for dinner!

As a kid I remember how much I looked forward to Thanksgiving, not only for the turkey but for the stuffing. It was one of the few times a year my father cooked, and the old man knew how to make stuffing! And in those wonderful days of yester-year, we cooked our stuffing inside the turkey and it was the best I’ve ever had.

But now we know why it was so good, it sucks a lot of the moisture (and flavor) out of the turkey. That’s why a stuffed turkey is often dry and overcooked. And the really bad news is, it puts us at risk for foodborne illness.

The longer it takes the turkey to reach an internal temperature of 165 degrees gives bacteria more time to multiply. And that means that uncle Sal (salmonella) might be paying you and your guests an unexpected holiday visit, which will definitely put a damper on the festivities.

Let’s start by gathering the ingredients we need to make Potato Bread Stuffing. In Chef Speak this is called the Mise en Place which translates into Everything in its Place.

Do I have to use mushrooms in my stuffing?

No, you don’t. We love mushrooms and they blend really well in the stuffing mixture?

How to make Potato Bread Stuffing

It’s really pretty easy to make stuffing. With just a little prep and your homemade potato bread stuffing will be ready for the oven.

What else can I add to my stuffing?

These are some of the additions you can add to your stuffing.

Cooking should be about what you enjoy eating and what your family enjoys. I won’t suggest experimenting at Thanksgiving, but trying different types of stuffing during the year will be a delicious way to try new flavors.

Do I have to use potato bread to make stuffing?

No, you don’t. You can use your favorite bread to make your stuffing. I do like using the bread cubes, it makes a more uniform stuffing and potato bread cubes are more like fresh bread. If you want a more rustic-looking stuffing use french bread or rolls and cut it up into irregularly shaped cubes.

**If you do use a stuffing like Pepperidge Farm, you may need more stock to reconstitute the dry cubes.

The next step in making our stuffing is to add the cooked celery, onions, mushrooms and all the liquid from the pan to the potato bread cubes. Next, mix the poultry seasoning into your stock and add the stock to the stuffing mixture, mix well.

**Don’t add all the stock, reserve half a cup, adding it only after checking the consistency of the stuffing. The stuffing mix should be wet, but not soggy!

Pour the stuffing into your baking pan. For this size recipe I used an 9 x 9 inch glass baking dish. Cover the pan with non-stick foil and bake at 350 degrees for 75-90 minutes. If you like a crispy top on your stuffing, remove the foil for the last 10 minutes of baking. I like my stuffing soft and moist so I don’t uncover my stuffing.

** Don’t use a baking pan that is too large. You don’t want a thin layer of stuffing, it should be 2+ inches deep.

I like my stuffing on the softer side, moist and flavorful. You should get a hint of butter and a light taste of poultry seasoning. The idea is to get all the ingredients working together, none overpowering the others. 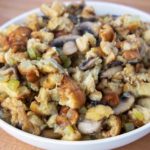 Print Recipe Save Saved!
5 from 19 votes

Stuffing is too good to only serve at Thanksgiving and those premade box mixes are sad imitators of a side dish that will only take about 10 minutes to make. Why not surprise your family tonight with a side dish of homemade potato bread stuffing with their roast chicken?
Prep Time10 mins
Cook Time1 hr
Total Time1 hr 10 mins
Course: Side Dish
Cuisine: American
Servings: 6
Calories: 259kcal
Author: Chef Dennis Littley