I don’t know if you’ve ever made no-knead artisan bread before,  but it really is simple, and quite good. One of the best books I have purchased is “Artisan Bread in Five Minutes” by Zoe Francois and Jeff Hertzberg. You can find a lot of helpful information as well as how to video’s at their website  Bread in Five.

Jeff and Zoe have brought bread back to the masses. With a simple foolproof recipe. I had absolutely no experience making bread and this recipe works every time! I also had the pleasure of meeting both Zoe and Jeff at the Foodbuzz Festival in San Francisco where they were handing out they’re a new book on Pizza.

You only need four ingredients to make Artisan Bread; water, coarse salt, yeast, and flour. Let’s talk about the flour first. According to the authors, all of their recipes were made with all-purpose flour, not bread flour.

]That being said, the next thing you need to know is all flours are not made equal. I use King Arthur’s flour at home for everything else, but it has a very high protein count (11.7), similar to bread flour (12.0). Now I can use it, but I will have to experiment to get the ratio correct.

Instead of going through extra work on the recipe just buy gold medal or Pillsbury flour which is closer to the 9.0 range.

As for yeast just buy the packets of regular yeast or if you are going to make bread on a regular basis buy the jar, it will be cheaper. Salt needs to be kosher, or Sea Salt, the flavor of the salt really isn’t going to come thru so any coarse salt will do (don’t use table salt). The last ingredient is simply warm water.

I have made one adjustment to the recipe and it seems to have made the dough lighter and lets it rise more while proofing. I read somewhere that salt can kill yeast, and in the original recipe, you add the salt and yeast to the water and then add the flour.
I started adding just the yeast to the water and adding the salt to the flour, so it doesn’t hit the yeast at full strength. My results have been better. 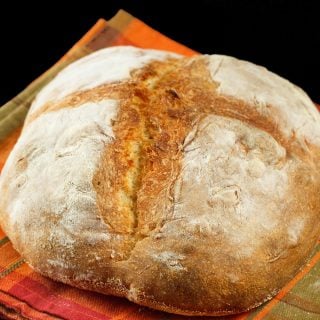 if you've ever wanted to make bread, this is the recipe for you! It takes just 5 minutes to put it together with no kneading! This no-knead artisan bread recipe will make 3 or 4 loaves of delicious rustic homemade bread!
Prep Time5 mins
Cook Time35 mins
Proofing Time2 hrs 40 mins
Total Time40 mins
Course: Side Dish
Cuisine: American
Servings: 32
Calories: 92kcal
Author: Chef Dennis Littley

*Its best to make it a day or two before you need it, remember this dough will last up to 14 days in the refrigerator, and the older it gets the better it will taste. You’ll begin to get more of a sourdough taste as it ages, in fact when you make your second batch don’t clean out the container and let the scraps of your original dough speed up the fermentation process.
*if you don’t have a bread stone you can bake this bread on a cookie sheet , you just won’t get the crusty hardened bottom to the loaf
*(You can form the dough into a longer loaf if you like, or make a bigger loaf, a bigger loaf may require a longer cooking time though)