How to make Steak Diane an American Classic-

After World War II  the nation began going out to dinner more regularly, and although chefs of that day may have lacked the television style cooking techniques we see in restaurants around the world, they had an elegant flair which made a dish like Steak Diane a true American Classic.

For me, the late sixties and seventies were my years of culinary exploration as they were for many of my generation. Dining out became the norm instead of the once a year birthday celebration.

Many of the classic dishes I grew up with and learned to cook when I first began my Culinary Journey have vanished from the menus we now find at our favorite restaurants, and that’s really sad. Dishes that were true classics and amazingly delicious just aren’t en vogue.

When was the last time you saw Crab Imperial, Chicken Cordon Bleu, Clams Casino or Steak Diane on a menu? They were delicious they were popular but they became outdated as more products became readily available for chefs to work with and those chefs created new dishes to tempt us with. The best way to deal with it is to remember that

Those dishes were popular for a reason, they were delicious. But as advancements in the culinary industry and new trends hit the scene they became forgotten and cast aside.

As more products became readily available for chefs to work with, those chefs have created new dishes to tempt us with. Some have become modern classics but all too often those also cast aside for new creations.

That keeps the culinary scene fresh and new but I would love to see chefs feature classic dishes and make old new again.

If Filet Mignon is too pricey for a weeknight dinner, try this recipe with flank steak or flat iron steak. You can even try substituting pork or chicken, although I will admit that this sauce really lends itself to Beef.

I like to set up my ingredients before I get started cooking. It makes the process easier and faster.

If you liked this dish you may also like these restaurant-style recipes: 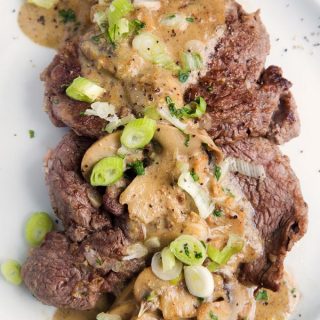