I used to marvel at them, the shiny plastic-covered rows of tilled soil awaiting a fresh planting. You could hardly miss them as your car jetted south on the 5 or 405. If you fixed your gaze a certain way, the passing symmetrical rows would appear as though they were in motion while you were seemingly stationary, suspended in time.

A kaleidoscope can give the same feeling. As a boy growing up near the Irvine Ranch in Orange County, CA, the influences of agriculture were everywhere. The big crop that comes to mind, of course, was the large expanses of orange groves. But another crop almost as abundant was strawberries.

Strawberry fields were interspersed throughout the region and If I had been afforded the opportunity to do so, I’d bet a fly over would have revealed a patchwork quilt topography.

Taking a closer look, the roadside fruit stand was always a favorite stop to pick up a couple of baskets of succulent red berries. The thought of sweet juicy berries conjures up images like billowy clouds of whipped cream, mounded atop those little golden cakes overflowing with sliced strawberries, or maybe some mottled fresh berries stirred into a pitcher of iced lemonade.

Sometimes though, the best way to eat them is to gently pinch a strawberry by the leafy stem and bite it clean from the core. It’s like a strawberry kiss―pure, sweet and simple. Are you feeling like a kid again?

Early April in the golden state is when strawberry season typically opens and the berry plants start hitting their stride.

It’s what I call the holy trinity effect: color, smell and taste―and when all three elements are in play, the effect is heavenly! The 2011 California strawberry season is no exception.

Soon to follow will be festivals, pie contests and bake sales heralding the arrival of the luscious berries. There’s so much to do, see and eat all in the name of this ravishing red fruit.

If you happen to be visiting us this spring or summer, keep your eyes out for those furrows of plastic covered soil…a field can crop up (pun intended) out of nowhere from Watsonville in central California to Carlsbad and beyond in the south.

Only now, those long rows are mounded over with thriving strawberry plants. Just remember to fix your gaze as you motor past so you can be mesmerized by the “kaleidoscope.

Mother Nature has been so generous with early spring showers it’s no wonder strawberries are responding so sweetly. You’ve likely heard me say before how much I love a recipe that celebrates one flavor and this cake sublimely does just that! Pureed strawberries are used in several components, so be sure to preview the recipe and see the notes below. 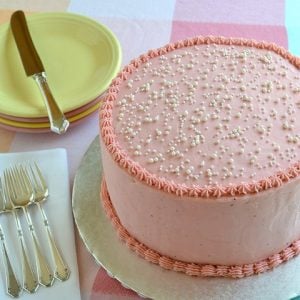 Print Recipe Save Saved!
5 from 7 votes

Fresh berries yield superb flavor and color to baking—choose ones that are fragrant, ripe and red. You may substitute frozen berries provided they are the whole, quick-frozen variety. Just thaw them and puree. If use you frozen berries with added sugar, then adjust the sugar accordingly in the frosting or it may be too sweet. Are you are unfamiliar with Swiss-meringue buttercreams? Be sure your equipment is grease-free (mixer bowl, whip and paddle) by wiping them with a paper towel dampened with vinegar. Then take it step-by-step and follow the tips if the process goes awry. The pasteurized egg whites in liquid form found in cartons at the grocery store are convenient and saves time.