How about a bowlful of quinoa breakfast cereal this morning?

I had already known that quinoa was one of the ancient grains coming originally from South America, dating back over 5000 years, but what I was surprised to learn later came while I was speaking with my mother.

I don’t know how many of you know that I’m half Mexican, it rarely comes up in conversation and I really never think of myself in ethnic terms, only as an American. But when you have to make a Latin-themed breakfast from a grain, and your Mother is Mexican, it certainly can’t hurt to ask her if she knew of any breakfast dishes made with quinoa.

What I found out truly amazed me. As with most people her age (almost 94) her present-day memories are not as clear as those of years gone by, and when I asked her she went into a long story about her youth and things her mother served for breakfast, one being quinoa. You see when you grow up in a family of ten children like my mother did, feeding that many people can be quite a chore and expensive. There were no boxed breakfast cereals back then except for Corn Flakes, and from what my mother told me you could buy a 50-pound bag of grain for about the same price as a box of cereal, so that wasn’t one of their primary breakfast choices. But my Grandmother was an exceptional cook and never let her family go hungry or be unenthused about a meal. Her dishes were always tasty, nutritious and filling.

But what she said next took me by surprise! She told me that my grandmother made quinoa for me all the time and that I loved it. As I thought back I did remember a breakfast cereal that she would make me, but I had no idea what I was eating, just that it was delicious!

We moved from Texas early on in my childhood, and I’ve never had that breakfast dish my Grandmother made since. We did speak more about how she prepared the quinoa, but since my mother never really liked to cook, she only remembered what went in the cereal.

She told me it varied depending on what was available, but it was always an assortment of nuts an fruits. She went on to tell me since they ate at different times in the morning the cereal was never really hot but mixed together in a bowl and then they would add a sweetened milk to it that would be kept warm on the stove.

While she didn’t know what the milk was made of she remembered it had a caramel-like flavor and a was very creamy. While my mother didn’t know the complete recipe, she had given me enough to recreate this simple but nutritious breakfast. I have to admit that I mixed my dulce de leche with a bit of heavy cream in addition to the milk, but I figured since I was eating something healthy it wouldn’t hurt!

If you’ve tried my Dulce de Leche Breakfast Cereal or any other recipe on askchefdennis.com please don’t forget to rate the recipe and let me know where you found it in the comments below, I love hearing from you! You can also FOLLOW ME  on Instagram @chefdenniseats and @chefdennistravels,  Twitter and Facebook. 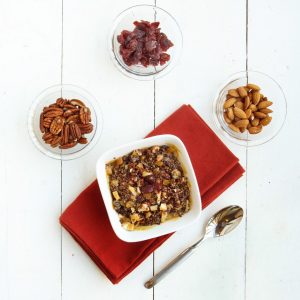 Print Recipe Save Saved!
5 from 8 votes

may substitute milk for heavy cream, or if you’re feeling naughty use all heavy cream!