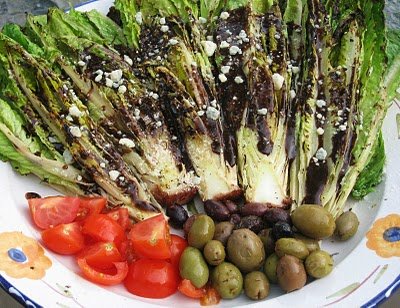 It was 94 degrees on Wednesday and I know its not officially summer but it sure felt like it. We set the table outside and I got everything ready for dinner. It was to be a simple feast starting with a Grilled Romaine Caesar Salad, we didn’t have any Caesar Dressing so we decided to use a Balsamic Vinaigrette instead ( it was tasty but the Caesar was better). The Salad is definitely not rocket science, split a head of romaine leaving the end intact (or the leaves all fall apart, found that out the hard way) drizzle some olive oil on the cut side a little salt and pepper and on the grill it goes. It doesn’t take to long you just want to crisp up some of the leaves, too long and they wilt and get ugly….so depending upon your grill I would say 3-5 minutes and you don’t really have to do the other side. Now here is the important part, heat the salad dressing. That’s right were going to heat the dressing, actually bring it to a boil to reduce it ever so slightly. Take your favorite Caesar dressing and put it into a small sauté’ pan, heat it till it just starts to boil then turn it off and let it sit until you are ready to serve the salad. I dressed this salad with Gorgonzola cheese crumbles (blue cheese would be wonderful as well), and some grated Romano cheese. I served the salad with some mixed olives and Campari Tomatoes (anything with flavor until the Jersey tomatoes start). Serve a whole side to your guests and let them cut it up on there plate and mix the dressing through out.
One of the best salads I ever had was at Joe Pesce in Collingswood, a Grilled Romaine Salad with Jumbo Lump Crabmeat and Grilled Shrimp, this with a slightly spicy Caesar dressing is just incredible!! 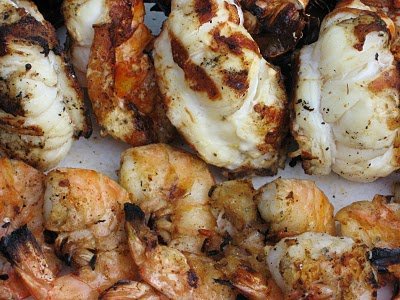 Now we move on to the entrée. Grilled Lobster and Grilled Shrimp. Before we begin with the grilling lets talk briefly about the seafood you use. When looking for shrimp you will now be able to find wild caught shrimp in a lot of the grocery stores. If yours doesn’t carry them, find a Whole Foods, Wegman’s,  or a reliable  seafood source. I recommend wild caught shrimp because most farm raised shrimp sold in supermarkets are not all of reliable sources. Many farm raised shrimp come from China, and there beds are not reliable, we can’t be sure what they feed on. So look for wild caught, Gulf shrimp, Pacific Shrimp or shrimp from Australian waters…..
Now as for lobster, that is harder to source, but since lobster is not farmed in third world countries we don’t have to worry as much about it. Still a reliable source is always a good idea. I buy my Lobster tails at Sam’s Club, go figure. It’s has always been good , they date it and put it on sale if the time comes too close, and its always cheaper there (that way we get to eat lobster more frequently).
We have our seafood now, so lets prep it. We are going to leave the shrimp in there shells to protect the meat during grilling ( and it gives your guests something to do during the meal), as for the lobster, we are going to split it down the middle with a French knife (please be very careful, the knife will slide off the shell) Place the  tip of the knife into end by the tail and then push down hard on the knife to go through the tail. (make sure the lobster is fully thawed)  Pull the tail out of the shell and then put it back into the shell.
Our seafood is ready so now lets put it into a bowl, add some olive oil and add a little old bay seasoning and coat the lobster and shrimp with the oil and seasoning. Now we can go to the grill. Place the Lobster meat side down on the grill with the shell still over it. Add the shrimp to the grill, keep them in the front they don’t take more than 2 minutes on each side to cook. They will be done before you turn the lobster.
Give the lobster about 5 minutes before you turn it over, when you turn it take the meat out of the shell and place the uncooked side on the grill. Give that side about 5-7 minutes and then you may need one more turn, depending upon the size of the tail. You can always cut into a part of the tail to check, it should be milky white, not opaque. So now your seafood is done!! Serve it up with some melted butter and a few grilled vegetables and you’ll be loving life.