It’s no secret that I love just about anything baked, sweet or savory, I mean just the aroma alone is enough to send me into a trance….sigh. Now I am not an accomplished baker by any stretch of the imagination, but I do enjoy baking, well more to the point I enjoy watching others eat what I bake! To me that’s the best feeling, watching smiling happy faces enjoying what you have made, and of course I do love finishing up the leftovers!

I stumbled upon a blog a while back that simply captivated me, entranced me, then left me hungry and drooling at my computer. What I found were two sisters from across the pond, two blue eyed sisters, two blue eyed sisters who loved to bake! You can tell they love to bake, it shows in everything they do. You’ll enjoy their playful banter as much as all of the wonderful treats they bake! These two Blue-Eyed Bakers live in the colonies now, but in different cites, Katy in Boston, and Abby in New York, it has to make baking together a little more difficult, but from the looks of everything they make, they have mastered the art of long distance baking.
So please after you read this edition of Guest Post Fridays at MTMF, head on over to see Katy and Abby at Blue-Eyed Bakers. You won’t be disappointed, just hungry when you leave.

Blue-Eyed Bakers
Well, hello there! For those of you devoted “More Than a Mount Full” readers who don’t know us, we’re the Blue-Eyed Bakers and the lovely Chef Dennis asked us to guest post on his blog today. Which, by the way, we are super excited about and perhaps just a wee bit nervous. What if you don’t like us? What if we say something awkward?!?! Omigosh, what if you don’t like desserts?!? Gasp! That would be terrible and we would feel terrible, but…I mean, we couldn’t say no to Chef Dennis, so here goes… 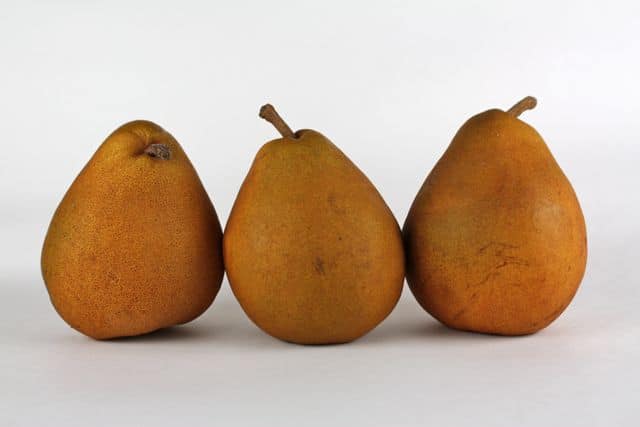 We are sisters. Katy (in Boston) and Abby (in New York City). We bake. We both have blonde hair. Er, obvy, we both have blue eyes. We have a blog. We grew up in a British household with an adorable teapot of a mummy whose attempts at entrees were less than stellar…prolly owing to the fact that they were largely English in origin and all overcooked. However, any lack of prowess in the dinner department was more than made up for in the sweets section. Lucky duckies that we are, our mummy was (and still is) the most divine baker. Our childhoods were food fairytales…imagine, if you will, clouds of flour, little girls in kiddie aprons licking bowls of brownie batter and cookie dough (screw that raw egg nonsense), stealing chocolate chips earmarked for banana bread and chasing our baby brother with just squeezed lemons for tart lemon cakes and squares…
Ok, so we are embellishing just a tad, but you get the drift. Baking is in our blood and blogging, well, that’s just what people do these days, right? 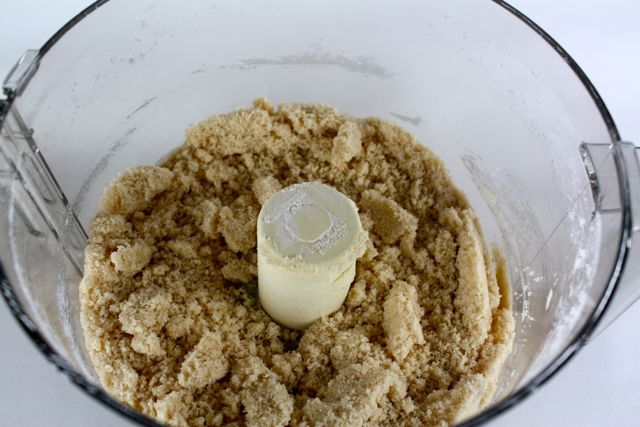 So when it came time to bake a little something-something for Chef Dennis’ “Mount Full” readers, we thought, let’s keep it simple, we don’t want to scare anyone off…And, really, dessert doesn’t need to be complicated, it just needs to be delicious.
This Pear Tart is just such a treat. People think tarts are fancy because they have fluted edges and are displayed on pedastal plates, but honestly, this one is so easy and so versatile, it’s the paper plate of tarts… 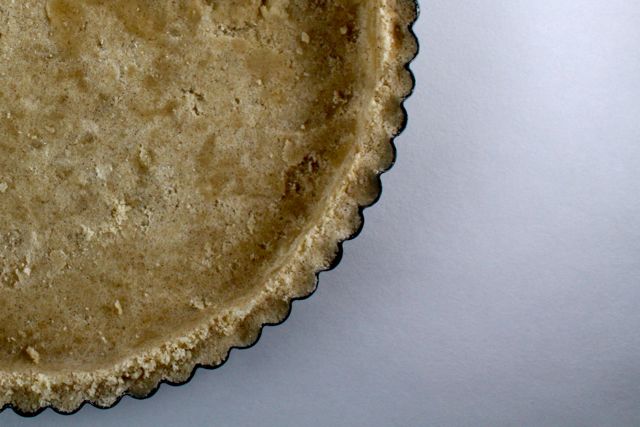 For example, the recipe in its original iteration was a Plum Tart, but really, plum is just code for a firm fruit similar to plums…We admit it, we do a lot of substituting when we bake because who has special flours and Brazil nuts on hand? Uh, no one. That’s who. And what’s the worse that happens? It tastes good? Exactly. 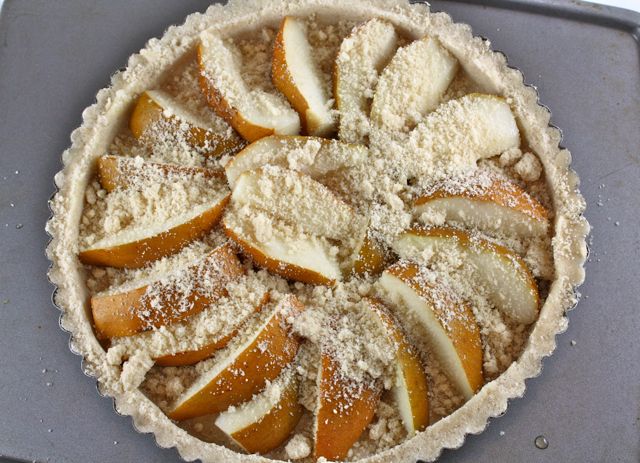 Wait. We digress. So the plums turned into pears which are actually more in season these days anyway though you could also used canned pears that have been drained too and avoid that pesky seasonality thing altogether.
Then, you put the plums (wink, wink) on top of a spectacularly simple cinnamon-y crust and then pour in faux custard. 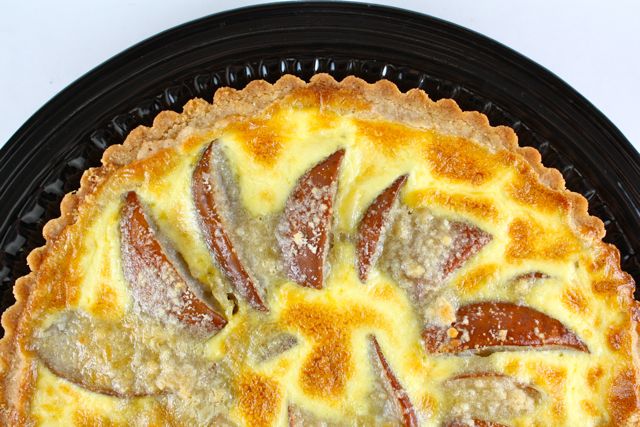 Yes, we said faux. You thought we were French for a second. But we’re not.
Custard turns people off because it requires some special attention at the stove and tempering eggs, but not to worry, this one is just egg and cream masquerading as custard. So you get all the yumminess of custard but with none of the work.
Um, so then you bake it altogether and put it on a fancy plate and no one knows any better. Easy, right? 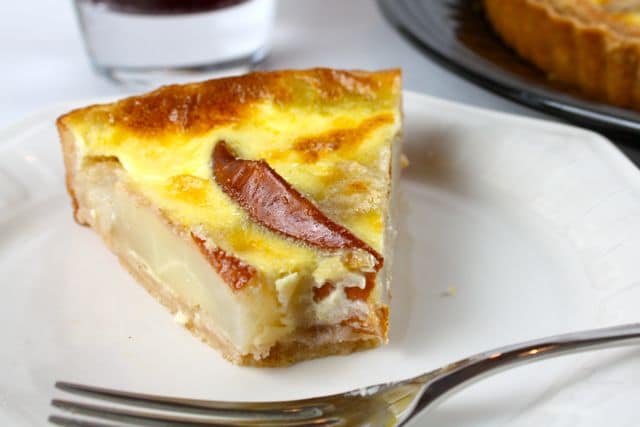 Cream butter and sugar together until fluffy in food processor. Add rest of dry ingredients, and mix in until mixture reaches a texture resembling peas (remember this recipe is from our Blue-Eyed British mummy).

Set aside 1/3 cup of the dry, crumble mixture.

Arrange the pears in a single layer in the crust, skin side up, in a spiral or circle pattern. Sprinkle the reserved crumble mixture on top.

Place the tart pan on a cookie sheet (to make it easier to take in and out of the oven and to avoid the dreaded over-flow…). Bake in the oven for 15 minutes and remove.

While the crust and pears are baking, beat the egg slightly in a small bowl and add the cream. Beat well.

Pour this egg mixture over cooked crust and pears slowly (allow some to absorb after each pour) and return the tart to oven for about 25 minutes or until knife inserted comes out clean. Don’t worry if some of the egg mixture overflows.
Allow the tart to cool, slice and serve.


More recipes from my site

Previous Post: « When All Else Fails, Make Comfort Food!
Next Post: My Travels with Mama Jennette – Part One Mama’s Feast »